Angola and Prospect Bluff are important maroon sites in the state of Florida. These sites were home to mixed communities of free African Americans and Native Americans during the early 1800s. The site of Prospect Bluff is located on the Apalachicola River and was home to a British fort manned by free Blacks and Indians. It was destroyed by forces under the command of Andrew Jackson in July, 1816. Angola represents a similar community along the banks of the Manatee River in Brandenton where many of the survivors from Prospect Bluff fled. These two sites are part of a forced migration that would eventually see many of its community members relocate to the Bahamas and other parts of Florida. DHI continues to work with scholars across the state of Florida to bring these sites to life. You can see sneak peeks of both virtual worlds below. 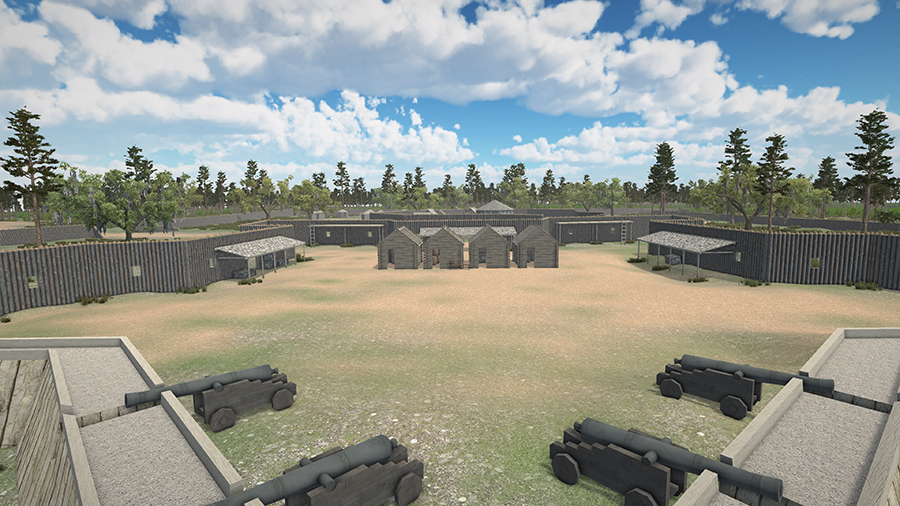 View of Prospect Bluff virtual world constructed as part of the Tragedy and Survival project.

The virtual worlds for Angola and Prospect Bluff are based on a mix of archaeological and documentary evidence. These digital reconstructions are part of a larger project led by Dr. Uzi Baram at the New College of Florida. He titled this project “Tragedy and Survival” and received funding from the Florida Humanities Council to fund our work. You can learn more about the project here.

The following videos show the current state of both the Angola and Prospect Bluff virtual worlds. We are completing minor adjustments to the landscape, structures, and interactive features of each world.


.
These and other videos will be featured at a series of public outreach events scheduled for August 13 and September 10, 2016. Click on each date for the associated flyer. The completed virtual worlds will be released to the public in September. Be sure to check back between now and then for more info.

Update: You can access the final version of the virtual worlds by visiting the Tragedy and Survival website kindly hosted by the Time Sifters Archaeological Society.