DHI worked with Kenneth Sassaman from the University of Florida to reconstruct the environmental and social history of Atsena Otie Key, Florida. This island was once home to a prosperous town boasting two large industrial facilities, the Faber Pencil Company's cedar mill and a large sawmill complete with worker housing.

Geospatial Analysis & Environmental Modeling
This portion of an 1884 bird's eye view shows the cedar mill, saw mill, worker housing, and other residences and structures. These bird's eye views were not only popular in the 19th century, but were also based on accurate measurements.

Our first step centers collecting, organizing, and digitizing historical data such as property deeds and census data, and transferring that into GIS formats. Although locating dozens of property deeds was straightforward in the county archives, relating them to physical space was challenging. The deeds rarely included metes and bounds descriptions, instead referencing lot and block locations (e.g., Lot 1 in Block 1). This referenced plat map is missing from the country archives. Census records pointed to a connection between the original owner of Atsena Otie, Augustus Steele, and the Matheson family in Gainesville. Steele's daughter, Augusta married James D. Matheson and handled property sales from Gainesville, where our research located a plat map in the Matheson House Museum.

Georeferencing Atsena Otie's plat map allows for the reconstruction of past parcel boundaries.

This information is useful for referencing other historical data like an 1890 Sanborn Fire Insurance Map. Accurately situating this map on the current landscape shows how much of the factory remains are no longer present due to erosion. A combination of deed research and census records reveals where specific families lived. This is useful for not only reconstructing the social landscape, but also for placing oral testimony. For instance, accounts of the 1896 hurricane recorded in the mid-1900s includes a statement by Velma Crevasse about her family abandoning their home as the storm surge approached and seeking refuge in a neighbor's three-story building at higher elevation. 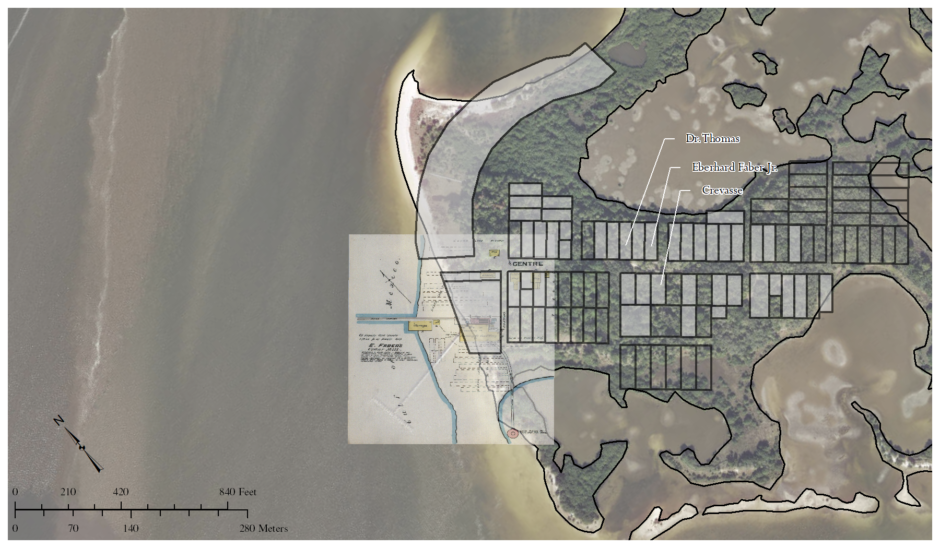 Additional historical records include coastal charts and maps for the area dating to the mid-1800s. Although they include accurate coordinate data, they did not to line up with the modern coastline suggesting the historical data was inaccurate or flawed in some way. However, historical coastlines did match up suggesting something else.

Atsena Otie's modern coastline (in black) over surveys from 1852 & 1905. Past coastlines don't match the present, but do match one another.

That something else is likely a combination of dredging and anthropogenic climate change (aka global warming). Comparing aerial images from the 1960s, 1970s, and 2010s demonstrates how much of Atsena Otie has dissappeared in the past 50 years. Indeed, several acres of the island has disappeared during this time. Part of the erosion is from dredging to the west, but that had minor impacts as evidenced by the majority of erosion taking place in the past 40 or so years.

Our work also includes working with LiDAR data collected by the University of Florida's GatorEye folks. Our processing of this high-quality, low-altitude data utilizes the freely available Relief Visualization Toolbox (RVT). This processing points to several interesting features lining up with other data for future ground truthing efforts. 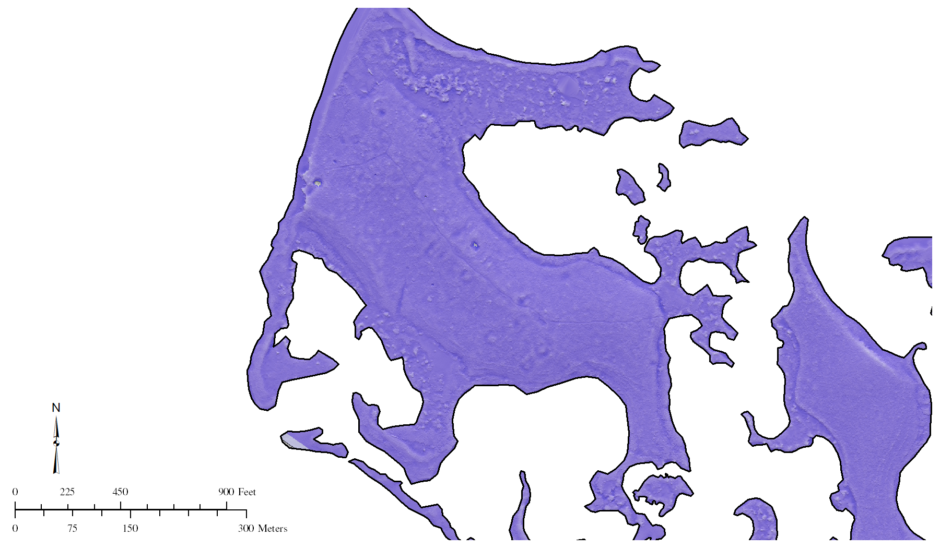 We look forward to continuing this project, including plans to virtually reconstruct the island as it appeared in the 1890s.
Cemetery Virtual World

DHI joined staff from the Lab of Southeastern Archaeology (LSA), staff from the Florida Public Archaeology Network (FPAN), and volunteers to assist cleaning headstones and trimming vegetation immediately surrounding the markers. Doing so uncovered details and made it easier to document the markers and prepared them to be photographed for photogrammetry. We took thousands of photos of the grave markers. The photos were later processed using photogrammetry software to create highly accurate 3D models of each grave. The models were cleaned up and digitally reconstructed to prepare them to be functional in a virtual world environment (VWE).

Combined with mapping data and a digital elevation model (DEM) of the island, we produced a virtual reconstruction of the cemetery. To add to the realism, we also used models of vegetation from the area as well as audio of native birds and insects. Currently, the virtual world is available as a download for Windows. Once downloaded, unzip the file wherever you like on your computer. Selecting Atsena Otie Cemetery.exe will start the application. For instructions on how to navigate and move around the virtual world, please refer to the image below. It is also available within the program by selecting ESC while in the virtual cemetery.

How to navigate within the virtual cemetery.