Digital Heritage Interactive, LLC (DHI) was proud to partner with researchers from the New College of Florida and elsewhere as part of the Tragedy and Survival project.  This project utilized 3D technologies to reconstruct two Florida-based Black Seminole/maroon sites. Maroons refer to populations of African Americans and/or Native Americans who lived freely in Florida. The term is also used to denote similar populations living elsewhere like the Caribbean. DHI’s involvement in the project, funded by the Florida Humanities Council, centered on the virtual reconstructions of the sites of Prospect Bluff and Angola. 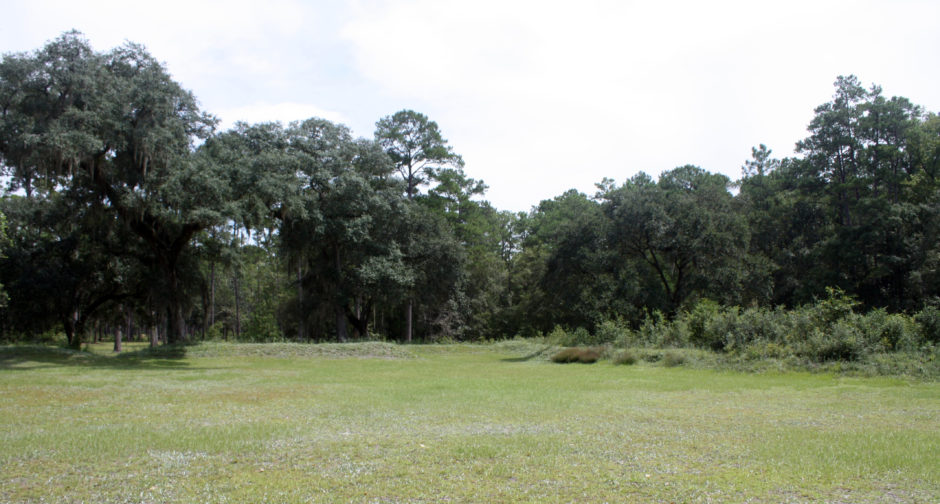 The site of Prospect Bluff (aka Fort Gadsden) in 2015.

Today, the site of Prospect Bluff is located in Apalachicola National Forest. The site was once home to a thriving maroon population, and served as something of a community center for Black Seminole farms scattered up and down the Apalachicola River. On July 27, 1816 US Naval forces destroyed the fort when one of their canons hit the fort’s powder magazine. A ‘lucky’ shot that caused the magazine to explode killing upwards of 300 people at the fort. 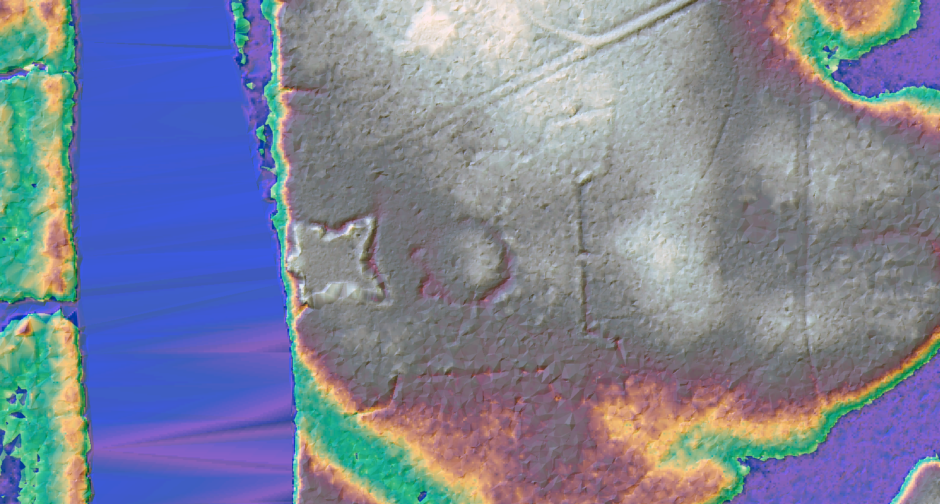 The LiDAR Analysis of Prospect Bluff was essential for our virtual reconstruction.

Our reconstruction of Prospect Bluff began with an analysis of LiDAR data for the site. We did this for several reasons. First, the LiDAR data clearly shows the outline of the earthworks and provides dimensions for the virtual resonstruction. Second, while historical accounts suggest that a large, earthen structure was placed in the vicinity of the powder magazine, no such feature appears in the LiDAR data. This helped inform the type of 3D models that we would build and place on the landscape. Finally, we created a workflow for taking LiDAR data out of a GIS and into a game engine, allowing us to produce a very accurate ground surface for our virtual reconstruction. 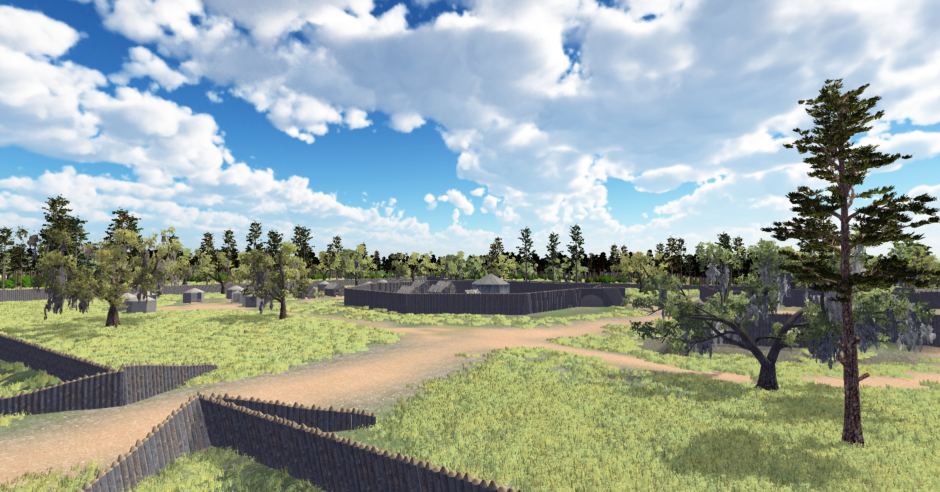 A view of the Prospect Bluff virtual reconstruction showing parts of the fort and area surrounding the powder magazine.

Structures and other 3D models produced for the virtual reconstruction were based on historical accounts. This included creating 3D models of time-appropriate structures, weapons, and everyday items like plates and pipes. Many of the everyday items were based on artifacts recovered from the site during a series of excavations in the 1970s. 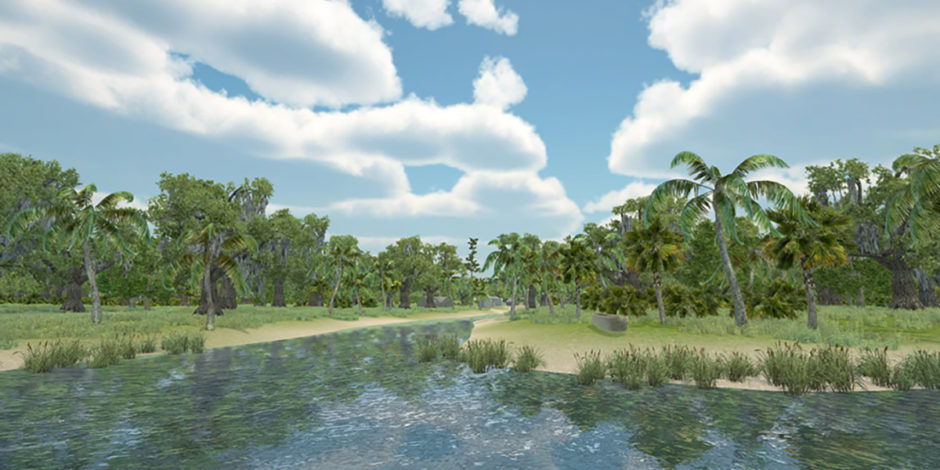 A view of the Angola virtual reconstruction from the Manatee River, highlighting the site’s secluded location.

We reproduced the above approach with the site of Angola as well. This represents another chapter in the history of Florida’s maroon communities. The Apalachicola communities began to move south following the destruction of Prospect Bluff. They stopped at several other locations, often to be run off again by US troops and/or citizens. One of the locations they eventually settled came to be known as Angola. Situated along the Manatee River in what is today Bradenton, Florida, this site was located close to a waterway, but far enough away from it to obscure the settlement. This aspect of the site figured prominently in the virtual reconstruction, as did a vegetable garden and other features based on recovered archaeological evidence. 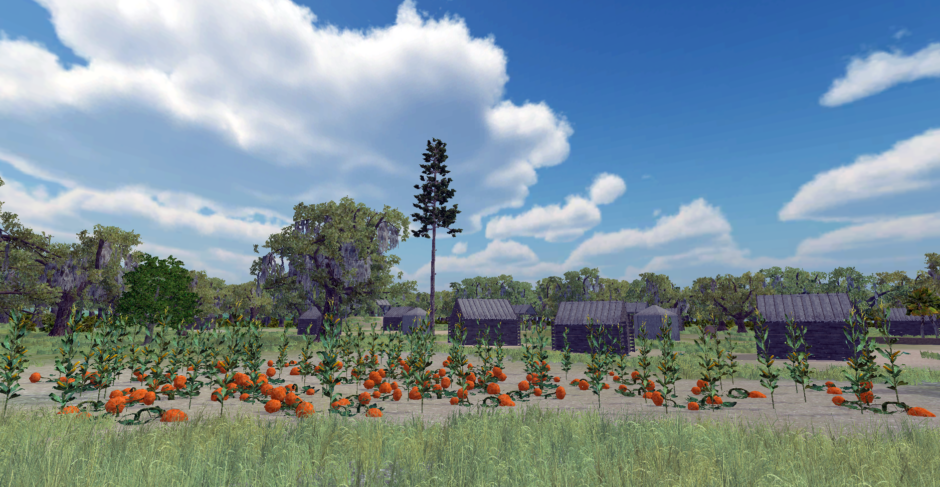 A view of the garden in the Angola virtual reconstruction.