The Jewish Cemetery in Charlestown, Nevis is a truly unique heritage site. Within its current boundaries are the remains of numerous Jewish graves dating to the 17th and 18th centuries. There are 19 marked burials, and previous archaeological work suggests that as many as 44 additional unmarked burials may be present at the site. In partnership with the Nevis Historical and Conservation Society (NHCS) and researchers from the University of Florida, DHI has constructed a virtual version of the site to help share this valuable heritage resource with a wider audience. Our project began during the summer of 2015 when we mapped the site using a mix of digital and traditional surveying methods. This included the use of a digital total station to crate an accurate 3D map of the site. 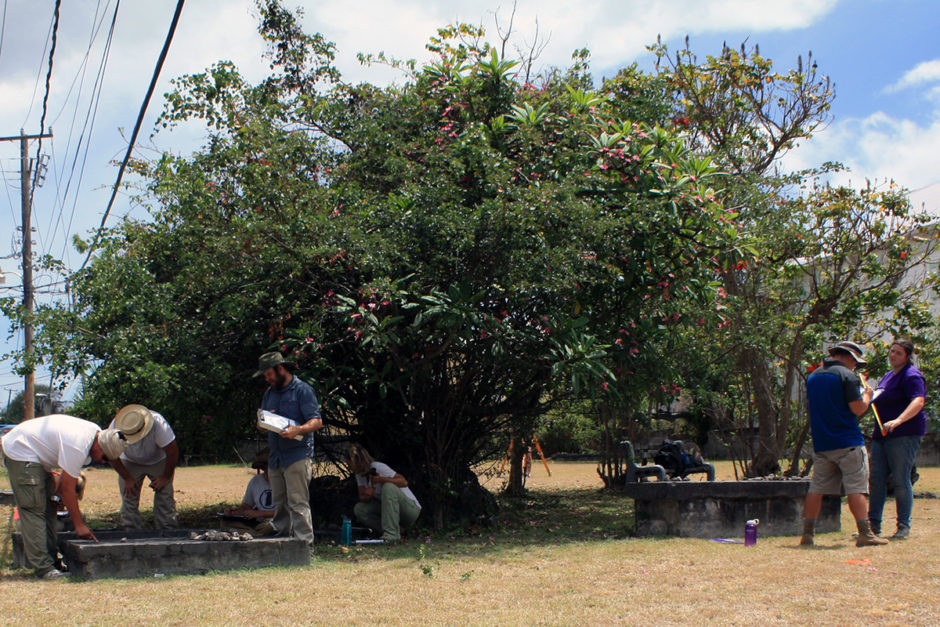 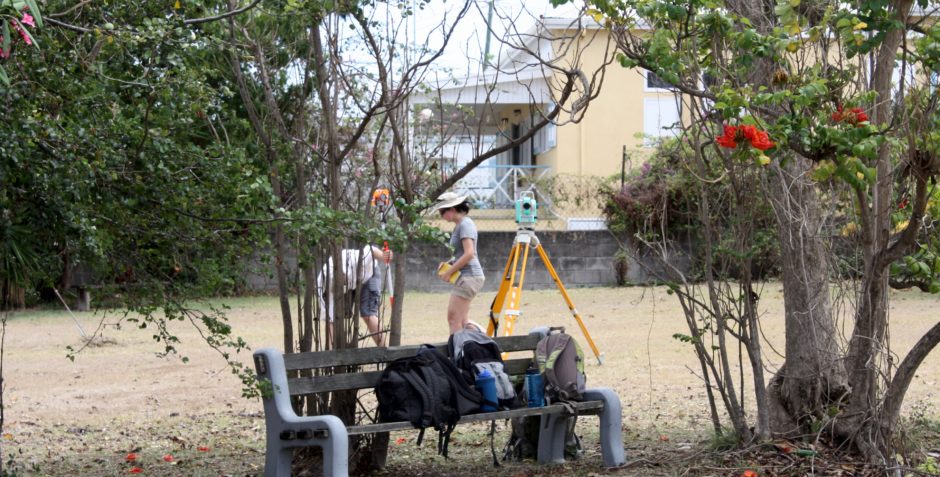 Setting up the total station to map grave locations and produce a 3D surface for the virtual world.

A series of photographs were taken of all extant graves for photogrammetry, and to create 3D versions of each crypt. These high-detail models were then simplified through a process known as “retopologizing” or “decimating” where low poly/lightweight versions of each model are manually produced. These low poly versions are less complex and require fewer system resources. This means the final virtual world will run smoothly on a wider range of equipment/computers. The graphic below shows the progression of one crypt from the original photogrammetry model on the left and the final low poly version on the right.

Illustrating the workflow of taking a rough photogrammetry model and refining it with Blender for use in Unity 3D. 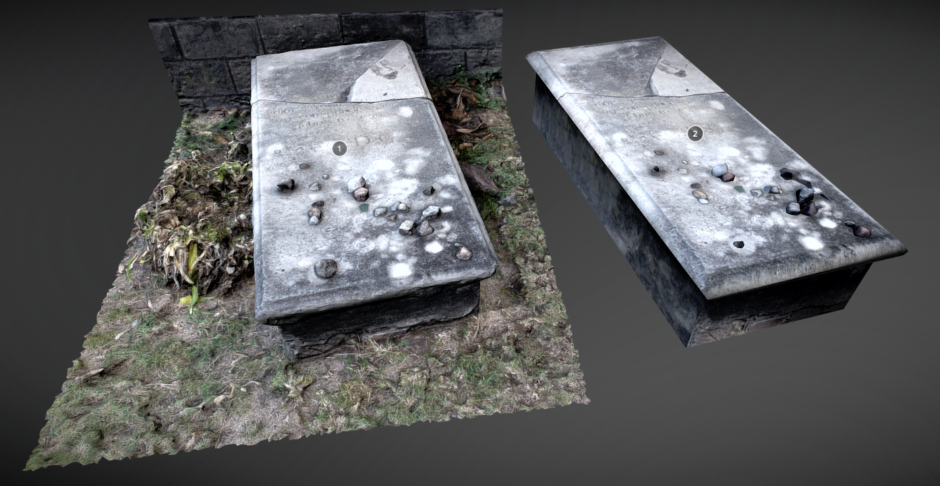 Interact with the high and low poly versions of the graves by selecting the image above. Opens in a new window.

Additional landscape elements were created, including the cemetery’s ground surface (from total station data), walls, and so forth. Roads and buildings were constructed to anchor the cemetery in virtual space. The surrounding landscape and features are stylized versions based on nearby structures, and not exact replicas of the site’s context. The virtual world was constructed with Unity 3D. 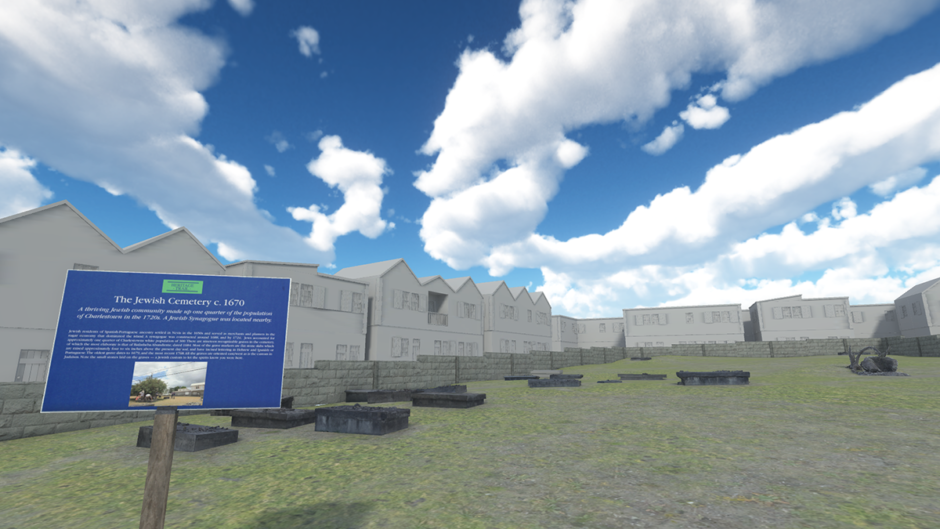 A screenshot from the virtual version of the Jewish cemetery.

The final version exists in an offline form that can be downloaded below. The updated version allows users to interact with each of the graves, and a simple user interface provides additional information regarding each burial (e.g., dates, translated inscriptions). The screenshot below is an example. 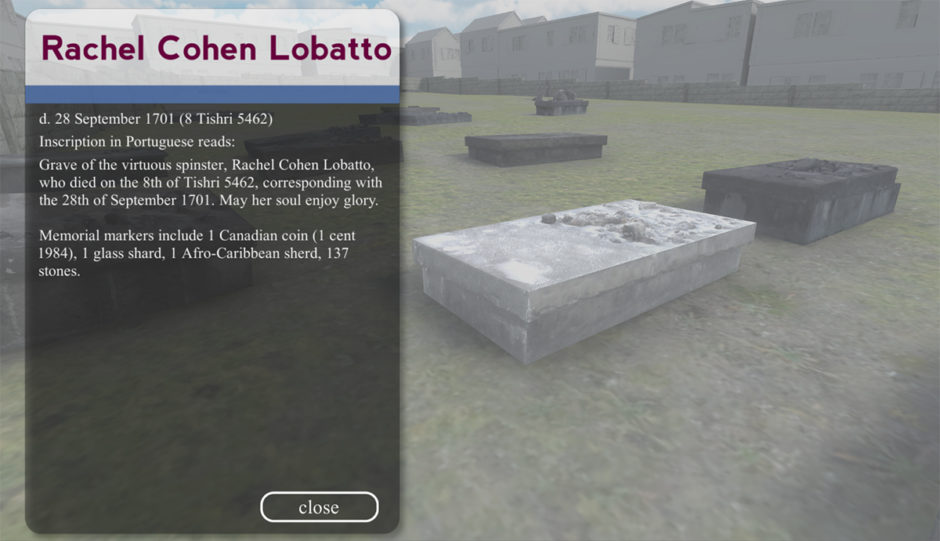 A screenshot of the UI in the Jewish cemetery virtual world.

Download the desktop (final) versions below. At this time, support is only available for the PC/Windows version, but we’ve made the others available as well.